On Sunday 18th March 2018, Castleton Brass will once again be heading to the Regional Contest in Stevenage. This time, following our promotion last year, we will be competing in the Second Section. We’re hoping to make history as the first band to win the Fourth, Third and Second Sections in consecutive years at the London and Southern Counties Contest. As added encouragement, the band have recently been featured in the Diss Express newspaper. 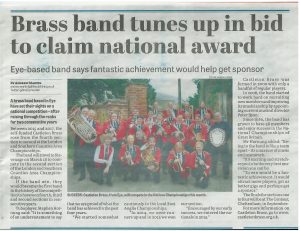