Mel Stammers was born locally in Ipswich and he began playing Trumpet at the age of 10, playing with the Stowmarket Schools Concert Band. He joined the Junior Leaders Regiment in 1976; there he immediately changed to French Horn and won the prestigious 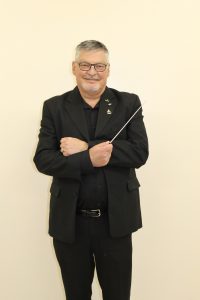 Mel attended the Royal Military School of Music at Knellar Hall, studying under Denzel Floyd of the BBC symphony orchestra, and in 1978 joined the Cambrai Staff Band of the Royal Tank Regt as principal horn. Upon leaving in 1988 he became principal horn of the Ipswich Orchestral Society performing with world famous soloists whilst conducting both the orchestra and the Stowmarket concert band for 18 years.